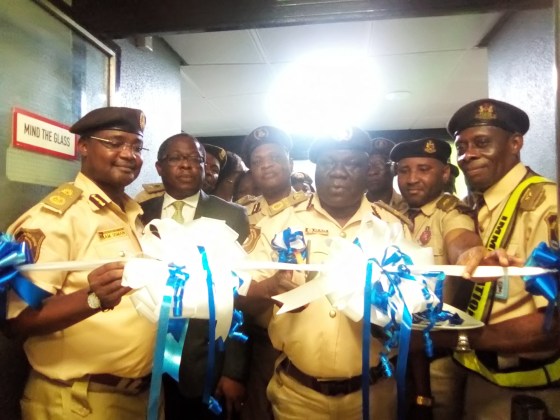 The speedy intervention of officers of the Nigeria Immigration Service, NIS at the Muritala Mohammed International Airport, has saved 150 Nigerians from being trafficked for dehumanizing activities outside the country.

The suspected victims who were intersected in the last 4 months could
not explain their purpose of travelling and what they expected to do on getting to their destination during profiling were denied departure by officers of the NIS.

In a chat with newsmen in Lagos, Comptroller Immigration, MMIA Command Lagos, Abdullahi Usman said the victims mainly males where between the age range of 16-40 years, adding that many of them where propelled to embark on the journey because of greed and ignorance.

“Recently we have stepped up our tracking on anti- human trafficking measures by denying boarding to one hundred and fifty persons, who
were refused departure because they failed to meet the requirements of
border control posts. These passengers do not know the reasons for their intent to travel and where they were travelling to.

According to Usman, on discovering that these were victims of human trafficking, officers of the NIS in the Human Trafficking Unit swung into action to educate them on the dangers of embarking on a suicide mission.

“They were taken to the place where returnees are kept, when they saw those returning, they realize it was not worthy it to continue the journey, they appreciated the counsel and decided to go home”.

“We had to counsel them, and in the self discovery, they were happy we stopped them from such mission. But, we are making efforts to track down the traffickers.”

On the Visa On Arrival introduced to facilitate tourists and investors entry into Nigeria introduced few years, the Lagos Airport NIS boss said January till date, the Service had been able to process over
58,000 of Visa On Arrival passengers.

Usman noted that, it had also strengthened its border control with the
introduction of the Migrant Information Data Analysis System, MIDAS, as it had stopped the collection of cash payment for all Visa On Arrival processing.

To assist the Service, one of the commercial bank in the country, Access Bank made donation of office materials to the command; these include tables, chairs, cabin among others.

Executive Director, Retail Banking of Access Bank, Victor Etuokwu commended the Nigeria Immigration Service, the Murtala Muhammed International Airport Command, saying that the bank was prompted to upgrade facilities at Immigration offices at the airport because of the efficient management of the Command.

He commended the Comptroller, Lagos Airport, Abdullahi Musa for the way he was transforming the Command and noted that even the officers and men at the airport are happy because of Musa’s style of leadership.

“The role of Immigration is very critical for the country and this Command is efficiently carrying out this their responsibility. At Access Bank, we support good things that have national interest and that are why we want to identify with what is happening here. We are happy with what we are doing. You have very credible personnel; officers and men who are happy doing their jobs,” he said.

The Assistant Comptroller General, Zone A, Mohammed Alfa expressed the appreciation of the NIS to the bank, adding that if the private sector as part of their corporate social responsibility assist government agencies security and seamless passenger facilitation would be enhanced.

About 80 inmates escape in Paraguay prison.

About 80 inmates escape in Paraguay prison.

Editor - January 20, 2020
0
Nearly 80 prisoners, many of them members of a Brazilian drug- and the arms-trafficking gang and described as “highly dangerous,” have escaped...

Imo Judgement: We stand by our declaration – INEC

NYSC: The Hope and future of Nigeria – Makinde