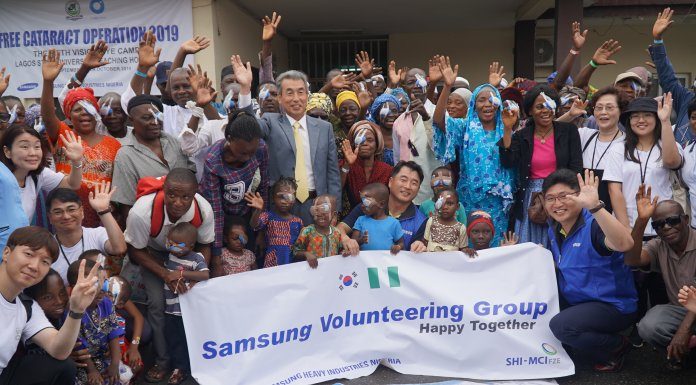 A total of 115 cataract patients benefitted from the 2019 free eye surgeries sponsored by Samsung Heavy Industries Nigeria Limited (SHIN) in collaboration with the Lagos State University Teaching Hospital (LASUTH), and Vision Care, an arm of the World Health Organisation (WHO) dedicated to restore and improve people vision.

Speaking to journalists at a joint press conference organised to flag off the programme at LASUTH on 30th September 2019, the Chief Executive Officer of SHI-MCI and the representative of Samsung Heavy Industries Nigeria (SHIN), Mr. Dongseong Suh, revealed that his company has been working hand-in-hand with Vision Care since 2015. Mr Suh further disclosed that the free eye surgery was part of SHIN’s Corporate Social Responsibility (CSR) projects in Nigeria, stressing that as one of the leading multinational corporations, the Korean shipbuilding giant recognises its corporate philosophy of giving back to the society on a global scale, including in Africa.

He identified other CSR projects executed by SHIN in Nigeria to include, the donation of electrical items and clothing to Rhizha community in Jos, Plateau State; establishment of a Welding Qualification Centre in Lagos; and the training of over 600 welders at no cost.

Mr Suh added that these welders have constituted the core of internationally certified workforce in onshore/offshore fabrication construction which will enable Africa to retain international projects.

He said that the cataract surgery intervention was targeted at the most vulnerable people who could not afford the cost of the surgery.

Citing a data from WHO, the CEO of SHI-MCI, and the representative of Samsung disclosed that cataracts account for 51 per cent of world’s blindness, adding that this frightening statistics had made the free cataract operation a worthwhile venture.

Also speaking at the press conference, the Volunteer Team Leader, Vision Care, Milyung Oh, said that the organisation was passionate about collaborating on missions that would restore immediate vision to citizens.

Two-year-old Victor was among the 115 patients who benefitted from this year’s free cataract eye surgery.

“Daddy I can see balloon” was the first statement that came out of Master Victor’s mouth after the doctors removed the bandage from his eyes.

Overwhelmed with joy, Victor’s father, Mr. Sunday Oshomore said that since his son was diagnosed with cataract a year ago, it was difficult for them to raise the huge amount needed for the surgery.

“He was a year old when we noticed that he can’t see. When I heard about this free surgery I decided to give it a trial and thank God today, my son can now see. By now he is supposed to have started school but because of the cataract he can’t go, but I am happy he can start school now.”

Mrs. Iweroma Grace, 70, who came all the way from Delta State recalled how she was made to change glasses frequently without result.

“I am based in Delta State, and back home I have visited several hospital where they told me that the solution to my short-sightedness is to change glasses. Only God knows how many glasses I have bought yet no changes until I came here and was told that it’s cataract that requires surgery,” she said.

Mr. Dehinsilu Miniru, 63, who was also among the beneficiaries, recalled how he has suffered due to lack of vision. “Before the surgery, I don’t use to see clearly, on regular occasion, if motorbike is coming I won’t know until it gets close to me. Sometimes, if something drops from my hand I won’t see it. I use to beg people to help me load recharge card on my phone,” he said.

Appreciating the gesture, the Chief Medical Director of LASUTH, Professor Adetokunbo Fabanwo urged other public-spirited individuals and organisations to emulate SHIN by assisting the less-privileged members of the society, saying “the state government is trying but we cannot do it alone. That is why we welcome and appreciate partnership like this,” he added.