The break out and wild spread of corona virus has taken a heavy toll on aviation globally. From high exposure of airline and airport personnel, through the near total collapse of international travel, to the closure of some airports, it is very obvious that aviation has taken the hardest hit from this pandemic.

The colossal losses arising from this state of affairs has created a very serious labour challenge. As the airlines, especially the international carriers, and the companies dependent on them count their losses, there is now a present danger that the workforce might take a hit as well. This is a matter of serious concern to NUATE as a labour union.

All stakeholders, ourselves more than others, must share the worry of the affected aviation companies. We truly sympathise with their situation. And there is a genuine fear that some of the smaller entities might be unable to survive the crush. This type of circumstance calls for sober thoughts.

On the other hand, it cannot be denied that the workers of these companies are real human beings with real human needs. The unfortunate situation of their companies does not diminish the bills they have to bear. If anything, the psychological trauma imposed by this condition may likely lead to health issues and cause greater spending. This unfortunate, paradoxical inter-relationship between the companies and their workers truly begs for understanding of the deepest kind.

Flowing from the foregoing, we wish to inform all the impacted aviation companies that NUATE stands firmly with them as a social partner. And we throw our doors open for discussions with them for the purpose of arriving at workable grounds upon which both sides will ride this testing period. We thank those companies that have already approached us in this respect.

We hasten, however to advise all our partners against unilateral actions that could be without heart. The present adverse situation is but temporary. Therefore all actions at this time need to draw from our common humanity. For, it must be noted that there will be the other side of this present adversity where we shall all still be together as families. We consider dialogue, as against show of might, a better approach, especially at this time. This is a clarion call.

We use this opportunity to commend the Federal Government who, through the Central Bank of Nigeria, has announced an intervention fund of N1Tr. to mitigate the negative impact of the corona virus pandemic. We are grateful that aviation has been named among the beneficiaries, and hopeful that the sector will actually be given the lion share. This is against the background of the well-grounded view that the adverse effects of the corona virus on aviation far outstrips the impact of 911 for which aviation received quite substantial interventions all over the world. We further urge that the modalities for the application of this fund should be quick to be released in other for the benefits to begin to manifest as quickly as possible. In this regard we are of the opinion that the positive handling of labour issues by the companies should be among the criteria to be used in accessing the fund.

We equally use this medium to call on all aviation agencies to activate, or scale up, their corona virus response modes. We expect an integrated mechanism that incorporates the entire airport activities nationwide led by the Federal Airports Authority of Nigeria (FAAN). This mechanism should in turn be integrated with the national response system. May we therefore be expectant of very urgent and effective steps towards prevention of the entrance of the ailment into the aviation workplace, and/or curtailing it in the event that the worst happens.

God bless us all. 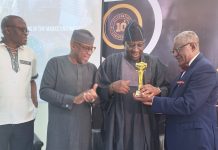